Calm and Curious for Fast and Furious

A line early on in Furious 7 eludes to this concrete truth. The fundamental laws of physics determine the stone cold reality that cars cannot fly. It’s a deeply saddening truth, but real life is like that sometimes. Flying cars have always been a fantasy in mankind’s far flung Jetsons styled future. Luckily we have cinema, where the same rules don’t necessarily apply, indeed the idea of cars not being able to fly has been routinely put to the test throughout the Fast & Furious movies – increasingly so, as the movies ascend higher up the numerical scale.

Indeed, cars that fly is something of a central theme to the seventh instalment in the deliriously stupid but highly likeable racing movies.

Starting off in 2000, The Fast & The Furious became a surprise sleeper hit, which launched the career of Vin Diesel. The Fast & The Furious was a Point Break styled crime thriller, in which an undercover cop (Paul Walker) is tasked with bringing down Dominic Torretto (Diesel) by embedding himself within the LA street racing circuit. Paul Walker was Keanu Reeves as the impressionable undercover cop, and Vin Diesel was the Patrick Swayze styled character. Whilst Swayze had a free spirited surfer charisma, Diesel was the stoic hardman in a white vest, an honourable thief with a moral code rooted in a strong sense of family that inevitably wins the cop over.

Since that movie 15 years ago, the street racing crime formula was relocated to various locations across the world and cast members left and returned to the franchise. It wasn’t until 2011’s Fast & Furious 5 that the series underwent something of a rehaul. Ditching the street racing scene, Fast 5 became a heist movie, a nitrous injected Italian Job that reunited the rag tag group of characters from the previous films in an Avengers styled super team up. It was a move that was designed to appease the fans of the series and further legitimize the weaker instalments (though Tokyo Drift is arguably the best movie of the entire franchise).

It also introduced Dwayne ‘The Rock’ Johnson as DEA Agent Hobbs, a stupendously proportioned hardnut designed to be the antagonist to Vin Diesel’s crew. The Rock is watchable in whatever movie he’s in and has thusly become a mainstay in the last three movies, becoming an ally to Toretto’s crew through one of the greatest scenes of manliness in movie history. The Rock returned as an ally in the sixth movie and he’s back for the seventh movie in a smaller role, which still sees him breaking out of a plaster cast simply by flexing his muscles.

Having earned their freedom in the previous movie, Furious 7 sees Dominic Toretto and his crew being hunted down one by one by Jason Statham’s Deckard Shaw. As an ex-SAS ghost of a ghost hard man, Shaw is out for revenge as the big bad brother of the antagonist of the last movie, who was left crippled in the climatic ‘runway scene’.  This prompts Diesel and co. to get back together for ‘one last ride’ as they are enlisted by Kurt Russell’s (yes, he’s in it too) government spook Frank Petty, to obtain a piece of stolen technology known as the ‘God’s eye’ that is vital to the government’s shady surveillance initiatives. It essentially works like the city wide surveillance device that Batman uses to track down the Joker at the end of The Dark Knight. It’s beautiful, unethical and dangerous, and it is also in the hands of another bad guy warlord mercenary named Jakande (Djimon Hounsou) who seeks to use the technology for evil purposes. By helping the government with Toretto’s brand of high speed car scenes, he will be allowed to use the device to track down Shaw so he can put him down for good.

If this plot sounds too complicated for what should be a straight up revenge movie, you’d be right! Whilst the mid credits tease at the end of Furious 6 set up what would be a simple story of Vin Diesel’s crew versus Jason Statham, one feels that the untimely death of Paul Walker involved some serious script revisions.

In the opening scene, Furious 7 starts strongly with The Stath looking out over an overcast London, vowing to avenge his brother as he lies in a hospital bed, crippled in a coma. As he leaves, we see the medical staff cowering in the corner and thus we follow in one long shot as he walks out the way he came in. There is death and destruction, the aftermath of his warpath into the facility. It’s a great setup, that is both badass and ludicrous. It is on.

You would think The Stath would be ample villain. Yet, the film still feels it necessary to usher in a second villain in the form of Djimon Hounsou’s Jakande to act as a generic villain that is tied to the overly complicated hacking plot. The purpose for Toretto and his crew to help the US government is so they can use their surveillance equipment to locate Deckard Shaw, and thereby put him down for good. But nearly every set piece that punctuates the film’s plot revolving around the MacGuffin device, involves Shaw turning up to make things more complicated for the gang. It seems there are many opportunities to put Shaw down but the film demands prolonging proceedings with a string of inspired set pieces, before Vin Diesel can have that epic one on one fight with the Stath.

Luckily the action sequences in Furious 7 keep up with the high standard of the series. Cars don’t fly, but in Furious 7, they kind of do.

The much advertised skydiving cars scene, is the main highlight. It begins with the bonkers premise of each character in their self styled vehicle casually reversing out the back of a cargo plane. They parachute down to earth and hit the ground running as they intercept a heavily armed convoy. The action is delivered with precision and a dollop of humour, culminating with an extreme riff on the Italian Job cliffhanger.

Whilst the second big set piece involving a car jumping a couple of skyscrapers is more CG heavy, it doesn’t disappoint in the ‘batshit insane’ stakes. Furious 6 involved Vin Diesel driving head on into a crash, to launch himself through his windscreen on a trajectory that would make him catch Michelle Rodriguez’s character who was also suspended in the air for some reason. In a year in which Man of Steel made you believe a man can fly, Fast & Furious 6 did it with a flying Vin Diesel.

The final action set piece involving a cat and mouse race with a missile spewing drone across the streets of LA is a little bit messy in its orchestration. There are so many different things happening, with the racing, Paul Walker facing off against Tony Jaa, Vin Diesel fighting Jason Statham (street style yo) followed by divine intervention from The Rock.

Worst of all, it doesn’t really lead anywhere. Vin Diesel dies but gets better again and Jason Statham lives to fight another day. It all feels as if the film is treading water. Of course there will be more Fast & Furious movies but for the moment, Furious 7 is more preoccupied to act as a tribute to the late Paul Walker.

For the most part it is an effective tribute, if a little strange when you think about it. Part of the appeal of the franchise has been the way it has so endearingly believed in it’s own characters and the sprawling storylines they have been apart of over the course of seven movies. If you told me a couple of years ago that I would be pumped for seeing Tyrese Gibson providing comic relief in his fourth Fast & Furious movie I would have laughed at you in your face.

It speaks to why these movies have become so beloved. Behind the barmy action scenes and the soap opera plot developments there is heart and you do ultimately care for Toretto’s crew. In the case of Paul Walker, the line between actor and the actual character becomes blurred.

In a funny scene early on, Paul Walker’s character is behind the wheel as if prepping himself for a street race, but then we pan out and he’s actually in a people carrier, struggling to come to grips with the car’s many in built functions. In his domestic life, he misses the action and the bullets, and the whole film feels as if this is the actor’s last ride and that he will probably go out in a blaze of glory, sacrificing himself for the good of his crew. But in the end his character survives and is simply left to live his life, leaving the fast and furious lifestyle for a world of domestic bliss.

Considering the circumstances he died in – a high speed car crash – it all feels a little strange that the film gives him this ending. His character given the life that was stolen from the actor as a result of fast cars. Nevertheless, as Vin Diesel says goodbye for the last time, it’s hard not to feel the emotions run as a CGI version of the actor materialises to race Toretto for one final scene. As is custom, the film ends with one last race between Diesel and Walker. They drive parallel to each other until Walker’s white car drives onto a slip road and off into the sun. It’s such a simple shot, but so effective at pulling at the heartstrings.

Look at that, I guess cars really can fly.

As a film, Furious 7 is not as good as the fifth and sixth instalment, though it does offer great action and humour within the series suitably bonkers framework. The movie is more preoccupied with providing a send off for Paul Walker, which when you consider the history of the franchise and the obvious closeness of the team working behind the scenes was perhaps the only right thing to do. The series has always been about family after all and in losing one of their biggest member, how else was this movie going to play out?

There are going to be more Fast & Furious movies of course. The only question is where do you go after flying cars?

The greatest image ever made. 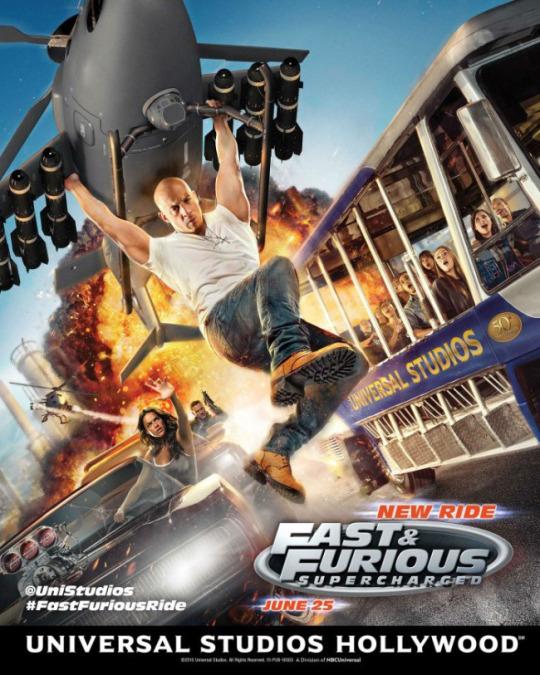