Guillermo Del Toro is a director I’ve got a lot of time for. Just like Ridley Scott, (of whom I talked about recently) he is celebrated as a visionary director, entertaining a vivid imagination and a unique approach to design. In addition, he is simply fascinating to listen to when he talks about his craft, he is also a big fan of It’s Always Sunny In Philadelphia and is even partial to the odd video game.

What Quentin Tarantino is to the pulp crime fiction, Del Toro is to the monster movie, and I love monster movies. Del Toro is a fanboy at heart. He grew up drawing pictures of monsters based on his own childhood fears, and he continues to draw concept art in his many notebooks, which then get used in his various movies. As a result, his monsters are always masterfully designed and stand apart from the usual cinematic bestiary. Whether it’s the Kaiju’s in Pacific Rim or the paly man from Pan’s Labyrinth, they are brought to life with a vivid sense of imagination that is part Harryhausen, part Stan Winston, and something else – something entirely his own. His creations always feel as if they come from a real place conveying so much more in terms of emotions than just pure horror. He gets monsters and understands that they are supposed to be monstrative of our very earthly human fears.

Throughout his career, the Spanish director has switched between making movies in his own native tongue and more mass market affair for English speaking audiences. Critics have always praised his Spanish language movies over his English language movies, which have frequently underwhelmed at the box office. Pan’s Labyrinth, undoubtedly, remains his best movie along with Cronos and The Devil’s Backbone, but I have a strong affinity for Hellboy 2: The Golden Army – one of the best comic book adaptations ever made in my book. I even remember being immensely freaked out by his moth men creations stalking the Manhattan subway in Mimic.

Del Toro is also a director known for projects that get unduly cancelled. Disappointment over what could have been seems to be a theme with Del Toro. We will likely, never see Hellboy 3, a particularly sore subject for me, as one movie would be enough to complete the story. Then there was the Hobbit, of which he spent three years in New Zealand developing with Peter Jackson with the intention of directing, before leaving the production to pursue other projects.

Then, there is his long suffering adaptation of Lovecraft’s At the Mountains of Madness, which is still awaiting to be made, like Terry Gilliam’s Don Quixote. Of course, most recently he was known to be working with Metal Gear Solid creator Hideo Kojima on a new Silent Game, that was unceremoniously canned earlier this year by Konami, leaving only it’s ingenius Playable Teaser (P.T.) as a monument to what could have been.

Like the monsters that are so often shunned by society, it sometimes feels that Del Toro himself does not get the recognition he deserves and the complete backing of a movie studio.

This takes us to his latest movie, Crimson Peak a gothic romance with more than a couple of nods to Edgar Allen Poe. If 2013’s Pacific Rim was Del Toro’s love letter to Japanese Kaiju and Mecha-robot fiction, Crimson Peak is his ode to the gothic romance genre and Hammer horror. A pure fan boy at heart.

The story revolves around Edith Cushing (Mia Wasikowska), an aspiring writer in the vein of Mary Shelly who has been inspired to write after her various encounters with ghosts. After meeting and falling for floundering old money brick smith Thomas Sharpe (Tom Hiddleston) not to mention a series of strange tragic events, she is whisked off to England to her lover’s stately family home – a large decrepit old manor house located in a remote region known as Crimson Peak – a place with a very unique geological composition which produces a strain of clay that is blood red in colour.

Here she must settle. In a big spooky old house that is slowly but surely sinking into the blood red clay, whilst withstanding her husband’s ‘difficult’ sister Lucille Sharpe (Jessica Chastain) and an assortment of things that go bump in the night.

Crimson Peak has a thoroughly decent cast. At some points it feels like a movie tailor made for all the Hiddlestoners out there. Our girl Cushing falls head over heels for Hiddleston’s Thomas Sharpe, despite there being enough reason for anybody to immediately distrust his Byronic persona. Hiddleston plays Sharpe as the typical Romantic hero with enough malice to make you feel uneasy.

Then you have Jessica Chastain as the ‘difficult’ sister. She is cold, indifferent and awful, and easily the scariest thing of the entire movie. She could have so easily hammed it up to the nth degree, but there is this ticking time bomb restraint she has, that is just magnetic to watch. Chastain has made a career playing characters you would absolutely not fuck with, it was true with her performance in Zero Dark Thirty and the Martian and it is doubly so in Crimson Peak. Whilst Hiddleston, to some extent, softens up the movie up playing into the romance of it all. She’s easily one of the best cinema actors working today.

Mia Wasikowska is decent as the heroine in peril, with just enough smarts and Cluedo savviness to work things out. The only problem, is that I found myself laughing at her ever worsening situation she found herself in. She becomes so smitten by her husband that she seems to find it okay to live in a big old haunted house with a gaping hole in the roof, whose walls occasionally bleed blood red as it sinks further into the ground. She seems so oblivious to how screwed up her situation is, purely because she is blinded by her love for the lovely Tom Hiddleston.

As you’d expect from a Guillermo Del Toro picture, Crimson Peak looks fantastic. At least up to a point. Allerdale Hall is this huge interior set with Giger-esque hallways that is the epitome of restless menace. It looks like a film set, like a Hammer film, but you also come to understand the layout of the interior. The colour palette is overly saturated in glorious technicolour, perfectly suited to the many volumes of blood (and clay) that are splattered throughout the film’s duration. As the movie enters its third act, with the house being consumed in snow that turns red outrageously due to the rising clay. It’s the kind of visual concept that is perfect for Gothic horror.

The various ghosts themselves also look suitably impressive, if overly designed. Whether it is skeletal remains under black veils or butchered carcasses with their mouths freakishly contorted to go along with their gaping axe wounds as evidence of the catastrophic atrocities committed against them. It all feels a little bit too much.

After the practical effects of Pan’s Labyrinth and the two Hellboy movies, or even the computer effects of the Kaijus and Jaegars in Pacific Rim, the ghosts of Crimson Peak feel a little bit lacking. Then there is their implementation.

During the middle of the film, once the heroine protagonist arrives at Crimson Peak, she begins seeing ghosts during her many midnight walks through the house. These encounters feel repetitive in a way a video game does. Protagonist must go to this section of the house to set off the ghost, materialising before her at the other end of the corridor. As it jankily gives chase, howling and screaming into the night, our heroine must turn and run to find some means of escape.

At other points during Crimson Peak’s mid section, the movie feels like a videogame you are watching somebody else play. The heroine alone and trapped in the big creepy mansion must obtain the key that unlocks the box in the basement that contains the gramophone record that holds the incriminating evidence that explains what is really going on.

Fortunately, the film ramps up into it’s third act, once Jessica Chastain is let off the leash. Anyone who has read enough Edgar Allen Poe, will see the ending coming a mile away of course, but it doesn’t stop you being involved in proceedings.

Crimson Peak is a great looking throwback to the old time gothic tradition. With some great performances by Tom Hiddleston and Jessica Chastain not to mention Del Toro’s imagination in visuals and sheer giddy passion for the genre, I would wholeheartedly recommend. Though it might not be the horror you have been waiting for this Halloween, Crimson Peak is more of a traditional love story that just so happens to feature ghosts. At the end of the day, it echoes the sentiment of Del Toro’s other ghost stories, namely ghosts are not to be feared but listened to. Instead, only the ceaseless malice of living mortal human beings should be enough keep you up at night.

That and people’s attraction to Tom Hiddleston.

If you like Edgar Allen Poe, then you will obviously love the prospect of John Cusack playing the gothfather himself in a murder mystery to hunt down a killer who is replicating famous death scenes from Poe’s various works. It’s too serious for it’s own super dumb premise, but I’ll watch John Cusack in anything… 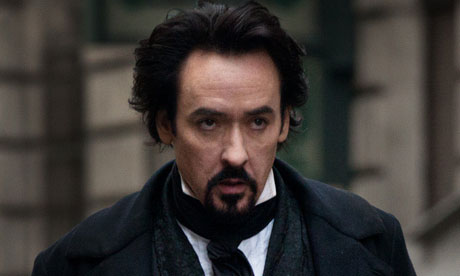 An ingenious slice of horror gaming and a sad reminder of what Silent Hills could have been.

This gif will attract web hits from Hiddlestoners in droves. A hit is a hit. And I need hits.

This site uses Akismet to reduce spam. Learn how your comment data is processed.